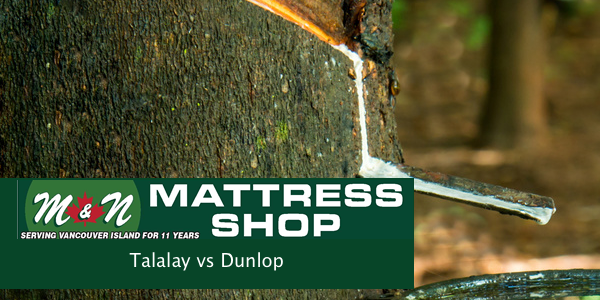 There are two main types of latex mattresses on the market: Talalay and Dunlop. In order to understand them, let’s talk go back and briefly discuss the history of latex.

When it comes to mattresses, latex is one of the most interesting, sought after, studied and tested materials out there. And it’s got a rich (and sometimes dark) history that has brought it into the spotlight today.

Latex comes from a naturally occurring ingredient: the sap from a rubber tree, or Hevea brasiliensis. The rubber tree was originally found in South America before it was exported to Asia is vast quantities. The climate it needs must be frost-free, have an abundance of rainfall, with high temperatures and high humidity.

The aforementioned dark parts of the history of the rubber tree have to do with colonialism and plantations that dominated and overran local farms and traditional ways of life in South America and after it was brought to Asia. Now, a couple hundred years later, nearly 75 percent of the world’s rubber supply comes from plantations in Malaysia, Thailand, and Indonesia from vast farms.

Not only does the rubber go toward making mattresses, it is also the primary ingredient in gloves, balloons, condoms, hoses, belts, and swim caps. Basically anything that is made of rubber gets its humble beginnings in the milky white sap veins of the rubber tree.

While rubber trees had long been used to make rubber products it wasn’t until the 1920s that E.A. Murphy, a British scientist for the Dunlop company, came up with an interesting idea. In one of those famous “Aha!” moments that pepper scientific discoveries, Murphy decided to use his wife’s cake batter mixer on latex. What resulted was the first prototype of latex foam. After several more years of trials and experiments, the first foam latex products were created.

The story doesn’t end there: enter the Talalay brothers. During the second world war, three brothers decided to enter the latex business. They wanted to make a superior product so took the Dunlop method and added two extra steps to it, thereby creating Talalay latex as we know it today.

So what exactly is this process and how does latex go from coursing through a rubber tree to becoming a mattress?

Here is the Dunlop process:
1. Thick rubber sap is whipped into froth in a centrifuge
2. Sap is poured into a mold and covered
3. Mold is baked

And here is the Talalay process:
1. Thick rubber sap is whipped into froth in a centrifuge
2. Sap is poured into a mold and sealed
3. Air is extracted in a vacuum chamber
4. Mold is flash-frozen to stabilize materials
5. Mold is baked

As you can see, the two extra steps that Talalay include are numbers three and five, vacuuming and flash freezing. And it’s because of this that Talalay mattresses are superior in quality when it comes to mattress production.

Talalay mattresses have a more consistent cell-structure that results in a soft and pillow-like product. The larger cells also result in superior air flow which conforms to your body without sinking. Dunlop mattresses on the other hand tend to be uniformly firmer and heavier without much “bounce back”. In addition, the smaller cells cause heat retention causing for less body temperature regulation throughout the night.

While both mattresses come from the same original material—the milky sap that runs through the rubber tree—the treatment is different resulting in a different quality of mattress.

But don’t take our word for it, try it out for yourself!

OUR 12 DAYS OF CHRISTMAS GIVEAWAY EXTENDED TO DEC 19TH